TopQM-Systems AG was successfully rated with 78% right away in the automotive sustainability platform SAQ4.0 for an OEM customer.

Newly revised AIAG Special Processes from 2019-2021 such as CQI-9, CQI-11, CQI-12, CQI-15, CQI-17 could be smoothly established in our seminar and auditor training program. TopQM-Systems was commissioned by the AIAG to officially translate the CQI-11 & CQI-12 into German.

The company conversion into TopQM-Systems AG was successfully implemented and thus gives us new perspectives to offer our global consulting, training and audit programs even more concentrated for our customers.

Our licensed VDA and AIAG online seminars have successfully established themselves.

The global corona pandemic Covid-19 has also slowed down our company's development. However, we took advantage of these lockdown times and started developing and supplementing our IMS consulting concept (integrated management systems based on the high-level structure) especially for SMEs with a focus on: ISO9001, ISO 14001, ISO45001, ISO50001, sustainability concept according to the guidelines of Automotive industry, supplier requirements, CO2 footprint calculations for companies, projects and products. CSR sustainability management as well as SAQ and EcoVadis support for a positive company ranking. Fits into this concept, rounded off with the digitization of business processes based on Office 365.

Expansion of our Chinese cooperation in Tianjing City / China with currently 8 certified VDA6.3 auditors on site, as well as nomination of our new TopQM Office China CEO and project manager for the implementation of technical cleanliness projects and supplier audits.

Launch of our new seminar online platform to simplify seminar organization for our customers. Development and new offers of online/remote QM seminar programs and lectures. Expansion and positive customer feedback on our global supplier audit offer, in particular according to VDA6.3 and AIAG CQI Special Processes.

Opening of a new location in Anderson/ USA, joint venture with CGP Consultoria global en productividad S.A. de C.V. in Mexico, TopQM becomes a license partner of the VDA QMC, expansion of the core team by additional employees, TopQM is an officially approved training center of the DHBW, TopQM is celebrating its 15th company anniversary, TopQM is represented on the training market with new modular seminar concepts.

Expansion of QM consulting services in Korea and China. Foundation of a new office in Beijing with local partners. Represented with its own booth at the "Z" subcontracting fair in Leipzig and at the "HK2013" hardening congress in Wiesbaden. TopQM-Systems is successfully recertified according to ISO 9001.

In 2012, TopQM-Systems achieves the highest annual turnover. Expansion of the offices in Romania, Turkey and China. Successful implementation and expansion of management systems with the support of TopQM-Systems ISO experts. Publication of the first own "APP TopQM-Automotive" available free of charge in the usual APP stores

TopQM-Systems expands the team with additional permanent employees. TopQM-Systems is already supporting the 70th company with certification projects. Expansion of the worldwide cooperation network and our seminar and audit offers around quality management.

TopQM-Systems achieves the highest annual turnover since it was founded. Further specialization in Technical Cleanliness and AIAG CQI standards.

Relocation of TopQM-Systems to larger company premises. TopQM-Systems supports the 50th company with certification projects according to the ISO standard.

Competence team develops the product "Basic Clean Check" (BCC) for technical cleanliness according to VDA19 and ISO16232. The "Technical Cleanliness" competence team is founded. Development of your own cleanliness/audit checklist/FMEA. 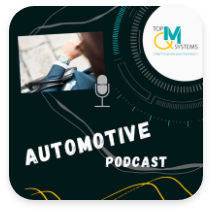 The automotive podcast is the first german podcast for QMBs, production managers and everyone who deals with quality and customer requirements on a daily basis 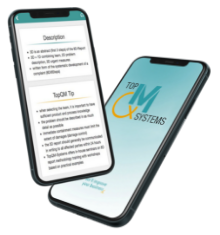 Our app offers you the opportunity to look up technical terms and abbreviations from the automotive world quickly and easily.